SSO is a convenient authentication method that allows users to access multiple applications and systems using just one login. LDAP is the protocol or communication process that will enable users to access a network resource through a directory service.

User accounts can be synchronized between the customer LDAP server and CubeDrive, with LDAP account details being saved in the CubeDrive repository. This allows the accounts to be assigned to CubeDrive groups for allocating the required permissions and privileges for the files.

CubeDrive uses LDAP authentication to authenticate such users, with credentials being passed to the LDAP server for validation, which is required before allowing access to CubeDrive. To improve performance, successfully validated credentials can be cached by CubeDrive; with an expiry timeout to ensure that revalidation does occur after an appropriate period.

Use of such accounts is transparent to your users, they see no difference between user and group accounts created from LDAP and those created solely in CubeDrive.

LDAP authentication occurs at the repository level, so is enabled and configured by CubeDrive:

After you login CubeDrive as the system administrator, you can setup the following parameters about your LDAP. See the following image for more detail information.

Tip: You can click "LDAP authentication and sync" to see detail under the Existing users sync tab. 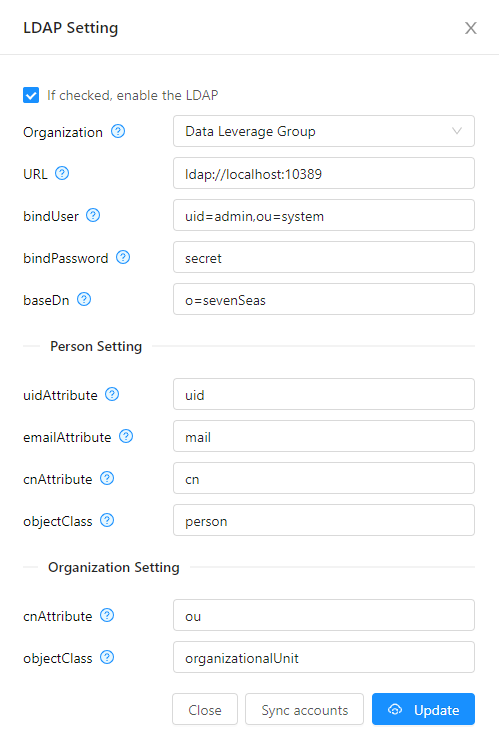 In the CubeDrive system, all the parameters about LDAP need to be setup with the following properties.

LDAP user need to be mapped to the CubeDrive user. The following is the LDAP person setting. When client added a user to the LDAP, in general, it includes the properties such as: uid, email, cn, object etc.

Tip: The object classes are defined in the LDAP directory schema - they constitute a class hierarchy there, there is one central top level class (which is called 'top'), all other classes are derived from that.

After client setup the above properties and click "Update" button. LDAP is ready for use. And client user can login CubeDrive with the existing accounts in the LDAP.

Tip: Client need click "Sync accounts" to load all the users from LDAP into the CubeDrive system.

Want to try CubeDrive
Please fill out the form. One of our staff will reach out to you as soon as possible and install CubeDrive into your own server.
Contact Us